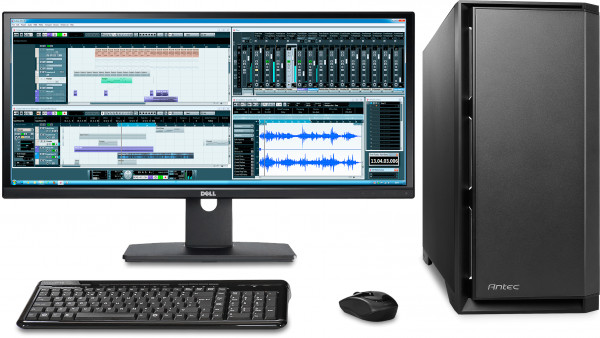 The Serenity Wavestation Pro offers a quieter way to edit and process your music making it perfect for studio use and as such, it is ideal for both home musicians and professionals working in a studio environment where quietness is important.

This particular computer utilises the Z690 chipset, so expect the improved connectivity like PCIe 4 speeds for all connected M.2 drives and USB 3.2 Gen 2x2 for USB speeds up to 20Gbps. The Z690 chipset also features RAID, multiple M.2 connectors, premium audio, HDMI and DisplayPort outputs and support for up to 128GB RAM. Below are images of each motherboard available in this system with a table that shows some of the specification each motherboard offers.

Which CPU do I need?

Given the need for a good processor with any DAW, we are only offering i3, i5, i7 and i9 processors with this system. Any processor on offer with this system will be fine for music production however, if you use a lot of virtual instruments and effects, that will have a greater impact on the processor so do consider a more powerful i7 or even the i9 processor.

The 12th Gen Intel processors offer a significant improvement over past generations, thanks to the introduction to Performance-cores (P-cores) and/or Efficient-cores (E-cores). The processors P-cores are optimised for single and lightly-threaded performance, while its E-cores, are optimised for scaling highly-threaded workloads. That means gamers, creators, and professionals can harness both intelligence and power to enhance the experiences that matter the most. All processors on the list feature P-cores, but not all offer E-cores. To give you an idea of much of an improvement the 12th gen is over the 11th Gen processors, take a look at the table below that shows some PassMark CPU Benchmarks, the higher the number the better the performance the processors offers.

The figures above are as of March 2022. They do change over time.

We offer the Wavestation with DDR4 memory that delivers up to 20% less energy consumption and twice as much density as the previous generation DDR3. DDR4 can help Wavestation users to load their programs faster, increase responsiveness of their system and help them to handle heavy data tasks in a flash.

Today, many musicians are using software based instruments, effects and sample libraries and if you are one of those people then the more memory that you have, the faster and more responsive your audio application will be as the PC will spend less time moving data to and from the SSD.

A good amount of memory to have for a typical home based DAW would 16GB but for more professional users, 32GB (or higher) would be recommended.

For the Home Studio

Home users or enthusiasts can simply build on the base configuration, adding higher capacity SSD drives and perhaps more memory or a bigger monitor if required. The on-board graphics support resolutions up to 4096 x 2304 @ 60 Hz (via DisplayPort and HDMI).

For the Professional Studio

Audio editing/production programs usually take up a lot space on your Windows desktop so it is usually a good idea to use a large display where possible. By default, the system will use the on-board graphics (supporting two monitors via DisplayPort and HDMI). With the addition of a discrete graphics card, the maximum supported number of monitors and/or resolutions will be increased.

DAW software usually takes up all of the space on your Windows desktop so it’s a good idea to use a large display like the ASUS 27” ASUS VG278Q 27in Gaming Monitor 1920 x 1080 Monitor or even the 28” ASUS TUF VG289Q 28in Monitor, IPS, 5ms, 3840x2160, HDR10, Monitor to expand your desktop. The more space you have available on your Windows desktop the easier it will be to work with your music software.

When specifying your new PC’s storage options using our system configurator below, you will be offered a choice of drives which vary by price and capacity. There are two primary types of storage. A conventional hard disk drive (HDD) offers huge storage capacity for a low price, but it won’t be especially fast and it will generate a certain amount of running noise since it contains a constantly-rotating spindle. A solid state (SSD) or a M2 drive on the other hand, offer tremendous speed and absolutely silent operation, but they cost more than an HDD for any given capacity.

So if you need a lot of storage space (for videos or large quantities of digital photos for example), then we would recommend an HDD. On the other hand, if you prefer silence and speed (especially boot-up speed), then an SSD or M2 drive would be a better choice. Of course you can have more than one drive, so you could have the best of both worlds by choosing one of each! We recommend that customers chose an SSD or M2 drive as a boot drive that contains the operating system and important programs and a conventional HDD to store other data, but remember that if you intend to have a totally silent PC you might want to forgo the HDDs all together as they will make some noise due to their moving parts.

Users with more advanced storage needs may be interested in having two drives configured as a RAID array in order to increase read/write speeds or to provide a more fault-resilient storage system. The two types of RAID we offer are RAID 0 (Striped) and RAID 1 (Mirrored) and they store information in completely different ways.

RAID 0 arrays stripe data and write information across two separate hard drives and is often used to increase the speed at which data is accessed and retrieved. The downside is that if a drive fails then you lose everything, so it is important to make regular backups.

RAID 1 arrays mirror data and write identical information across both drives simultaneously without a speed penalty. So if one drive fails, no data is lost and the PC stays running. However, if both drives (or more likely the motherboard) fails then you lose everything, so it is still important to backup regularly. 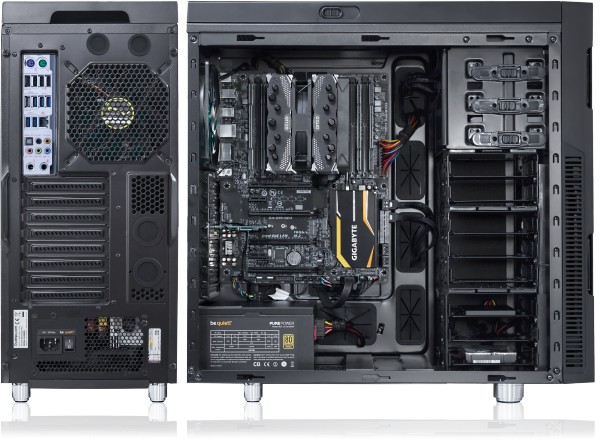 Don’t rely on RAID 1 for data integrity. No matter how well you think your data is protected, it’s always good practice to backup your data off the PC, either to an external drive or to online storage.

The price of many pre-built PCs these days is often supported by cash kickbacks from software companies who pay hardware manufacturers to pre-install limited or trial versions of their software and then hope that the customer pays to upgrade to the full version. The downside to this approach is that the new PC comes pre-loaded with a lot of “junkware” which bloats the operating system and can cause severe performance degradation.

Here at Quiet PC we believe that customers have every right to expect the best possible performance from a brand new PC, so every system we build comes with our Clean Build™ promise. We install the operating system (if you order one), motherboard drivers, OS updates and Windows Security - that’s it. You won’t be pestered by pop-ups and nag screens and you can get on with using your new PC immediately without having to uninstall lots of junkware first. Your new machine will boot in super-quick time and will stay running quickly for many months and years to come.

We offer free hardware technical support for as long as you own the machine. This support covers any hardware query or problem, including advice on maintenance and upgrades. We regret we can’t offer software support or training so we would recommend contacting the software vendor in this instance.

Our hardware warranty runs for at least two years and is “collect and return” meaning that you don’t need to worry about getting the machine back to us - we will instruct our courier to collect it from you on a day of your choosing, then after we have checked and repaired it we will send it back to you by express courier at our expense. In addition, unlike many other PC suppliers, we have an “open-case” policy which means you are free to open the machine and perform your own minor modifications or upgrades without worrying that your warranty might be affected.

Items are exactly as represented on site. Site Security is up to date Order was delivered very quickly (less that 24 hours)
(Review via Trustpilot)